Trade unionists must show they can create practical examples of solidarity between Israelis and Palestinians, the president of the Australian Council of Trades Unions, Sharan Burrow, told a labour movement meeting in Sydney this week.

” These practical working models would be a demonstration to all that a peaceful end to the strife between the two peoples can be achieved,” Ms Burrow told a largely labour movement audience attending a Fringe Event at the Australian Labor Party national conference.

The event, attended by more than 200 people, was sponsored by the Australian Workers’ Union (AWU) and supported by the Maritime Union of Australia (MUA). The Fringe Event was called to discuss practical solutions that the Australian labour movement could support to promote peace, justice and reconciliation in Palestine/Israel.

The discussions highlighted the recent creation of a new global labour grouping Trade Unions Linking Israel and Palestine (TULIP) which seeks to promote solidarity with both the Israeli trade union movement, the Histadrut, and the Palestinian trade union movement, the PGFTU. Paul Howes, the national secretary of the AWU, is a founder of TULIP , a global anti-boycott, divestment and sanctions (BDS) trade union group.

Doing what the labour movement does best - find practical solutions

Ms Burrow, who is also President of the International Trade Union Confederation, related stories about her several visits to the region where she shared both feelings of fear and optimism, despite the horrors, with her Palestinian and Israeli trade union sisters and brothers.

She praised the purpose of the Fringe Event to look at what the labour movement does best: ” build solidarity because we recognise that a worker is a worker is a worker, who deserved equal treatment in our eyes as they are all brothers and sisters.”

“If we can build solidarity between unions, first and foremost in this region the PGFTU and the Histadrut - something we have been doing through the work most particularly of the International Transport Workers Federation - then I am sure that trade unions can make a difference

“We now need to look for new ways that unions can provide real practical support for the peace process in the Middle East. I think we need to say we want trade unionists at the table during these peace talks, showing what they can do, showing how we can get a real outcome.” 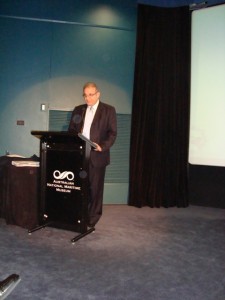 The key speaker at the event was the Palestinian Ambassador to Australia, Mr. Izzat Abdulhadi, a respected former civil society activist on the West Bank he has represented the Palestinian Authority in Australia since 2005.

Ambassador Abdulhadi said he was excited about being invited to speak at the Fringe Event because he wants the Australian trade union movement to mobilize the Australian people to continue their support for the peace process, and in particular to support the two-state solution.

He told the audience he wants unions to lobby the Australian government to increase aid to Palestine so that viable, efficient, democratic and transparent Palestinian civil society institutions can be developed.

The Australian Council of Trade Unions and the Australian Workers’ Union he said could support the development of a key sector of Palestinian civil society by regularly bringing Palestinian trade unionists to Australia to undergo leadership training programmes.

Mr. Abdulhadi said he would continue talking with the AWU about support for the training of union legal specialists and help in reforming arcane and multiple labour laws which governs the daily lives of Palestinian workers.

Ambassador Abdulhadi was warmly received by the audience as he outlined the parameters of what he saw as key issues needing to be resolved for a two-state solution. These included Borders, Jerusalem, Palestinian refugees, Jewish settlements, Security (for both peoples) and Water.

Paddy Crumlin, the national secretary of the Maritime Union of Australia, opened the ALP Fringe Event by showing a short documentary of the current working being done by the International Transport Workers Federation.

The five minute documentary Spanning the Divide, which will be formally launched in Europe in a few weeks time,  shows how the ITF has brought together the Palestinian General Federation of Trade Unions, transport section, and the Histadrut’s transport workers union to support truck drivers crossing through the Seperation Wall.

On the floor of the 2009 ALP National Conference, in the last hours of the policy-making talkfest, two near-iconic heroes of the ALP got up on their feet during the debate to praise the potential of Trade Unions Linking Israel and Palestine (TULIP).

Dr Mike Kelly, Parliamentary Secretary for Defence Support; Parliamentary Secretary for Water, but more importantly a former Australian Army lawyer with expertise in peacekeeping missions and occupations, and Warren Mundine, an Indigenous activist and former National President of the ALP, told conference delegates that TULIP was an example of how grass-roots projects involving unions across the Green Line could help to deliver peace between the Palestinians and the Israelis.

Ambassadors of Syria and Iraq

Mr. Sulaiman was invited to respond to questions from the audience about current issues between Syria and Israel.

Robert Goot, the President of the Executive Council of Australian Jewry (ECAJ), the national representative body of the Australian Jewish community was another panel speaker.

The ECAJ President made it very clear that like Mr Abdulhadi he too supported a two-state solution as the best way to ensure a comprehensive peace between Israel and the Palestinians.

Mr Goot, a long-time member of the Australian Labor Party and a former trade union official, congratulated the AWU for the creation of TULIP.

He said that this trade union grouping has the potential to be a practical initiative that can promote understanding between Palestinian and Israeli workers - as a vital part of promoting reconciliation and peace where it really counts at the grassroots.

The Jewish community leader said he would eagerly support the Australian government and the labour movement getting more directly involved in nation building activity for Palestine including providing aid for the creation of healthy viable trade union movement and much needed workplace law reform.

Friends of Palestine MP lobbied not to attend the Fringe Event

Her response was to note that Nelson Mandela had wisely said we don’t make peace with our friends but with our enemies.

Ms Saffin also quoted Dr Albie Sachs a victim of the Apartheid regime, who had told that one of the most difficult things for him had been to sit down with his Apartheid opponents and learn to treat each others as human beings after years of dehumanizing.

Albie Sachs, a hero to Janelle Saffin, also told her we should frame the peace process not as being about compromise, but rather about accommodation.

Michael Danby, the Federal MP for Melbourne Ports, and a long-time member of Parliamentary Friends of Israel, gave a short address and said that the spirit of the two-state solution infuses almost all of the Australian labour movement’s discussion about Palestine and Israel.

The discussions were wrapped up by Mr Mike Salah from the Palestinian-Australian community who outlined what he saw were the positives from the discussion, while not ignoring the fact that there were still differences in perspective.

He underlined the need for the labour movement to ” exert appropriate pressure to enable the positive initiatives and the vision for co-operation  floated during the discussion to be materialised.”