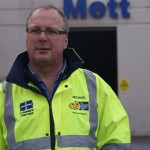 The emails say they want the ACTU and Australian unions to promote ‘pro-Palestinian policies’, and they want to see an end to what they call ‘ partisan one-sided support for Israel.’

If that’s the case they are probably not going to be happy with the result of elections for the ACTU this week.

Almost at the same time that AUSPalestine has set out to increase their influence in Australian unions, a new pro-Israel ACTU Assistant Secretary, Michael Borowick, has just been elected.

Earlier this year Michael Borowick – formerly the Assistant Secretary of the Victorian Branch of the Australian Workers’ Union - organised and led a tour by eight Australian unionists to Israel and Palestine.

The Australian delegation was part of a British Trade Union Friends of Israel (TUFI) organised tour, and then stayed on for a few extra days.

Borowick is a well-known long time Melbourne pro-Israel activist, a modern orthodox Jew, who began life as a political activist during his student days as part of the Australian Union of Jewish Students.

Pro-Palestine union activists have no time for Israeli workers

The AUSPalestine website says it advocates for Palestinian workers – but makes no mention on its website of Israeli workers, and their workplace rights.

Nor does the AUSPalestine website statement of principles seem to envisage support for an end to the Middle East crisis through a peace outcome involving a two-state solution.